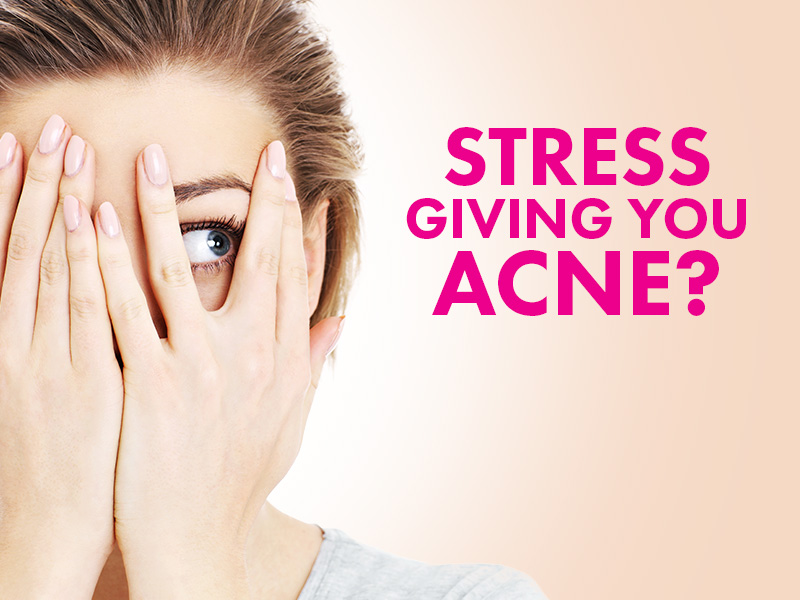 According to clinical psychologist Lisa A. Garner, when a person is already having acne and he/she comes across a stressful situation that is the time when acne really flares up. In other words, stress at an emotional level would not trigger a new pimple, but it may make matter worse especially with someone who already has the problem of skin disorder.

Stress and Acne -:  Is There a Connection?

Evidence has been mostly anecdotal, as for a long time, doctors have taken stress as the reason for worsening of acne. In 2003, a study at Stanford University published in the Archives of Dermatology observed that college students face acne flare-ups more during exams, reporting more stress, compared to times without testing. According to researchers, severity of acne correlated highly with increased stress.

According to scientists, cells producing sebum carry receptors for stress hormones. Sebum, the oily substance mixes with dead skin cells and bacteria to clog the hair follicles which give rise to a pimple.

A person with acne experiences a lot of stress, and somehow they are up regulated, which means that more oil is produced to clog the hair follicles and allow more acne to arise giving the stressed individual more pimples to pick at.

These researchers hypothesized that the increase in acne may be due to increased levels of sebum that is produced during times of stress. The researchers concluded that psychological stress did not increase sebum production crucially in the teens, leading them to suggest that that acne linked to stress may involve other root causes. Whatever the cause maybe, acne can surely have negative influences on the personality of individuals which needs to be treated as soon as possible.

Occasionally many people squeeze a pimple. There are more extreme cases where a person picks at blemishes compulsively as they are worried and embarrassed for anything on their skin. This condition is called acne excoriee. These people do not in reality have a pimple but have scabs instead which can lead to scarring. Such people can turn very small and mild acne into big.

Patients could be sometimes convinced to not pick up and if does not work out, they maybe asked to get psychological help. Scarring could be prevented by not squeezing pimples.